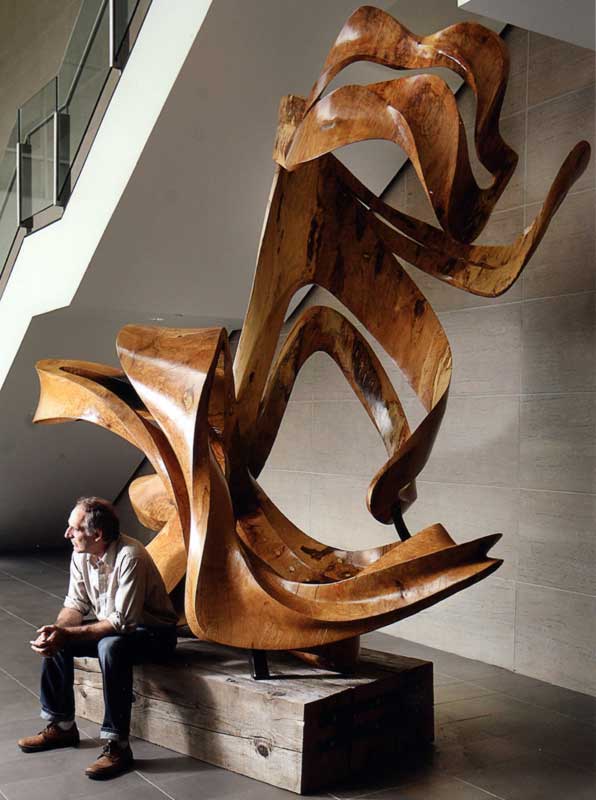 THE BEST OF 2012: From ALL-NIGHT ART to WILD HORSES

I didn't see every exhibition in the Ottawa area this year, but I did see many. Here are the shows in visual arts that I remember most fondly from the past 12 months...

4 Sailing Through Time (River Building, Carleton University):
Ottawa sculptor David Fels took the trunk of the 300-year-old "Brighton Beach Oak," a tree beloved by residents in Old Ottawa South until it died and was cut down last year. From a single block of wood Fels carved Sailing Through Time, a swooping, billowing colossus — more than 12 feet high and weighing hundreds of pounds. It's an eloquent, beautiful example of Fels' unique and profound relationship with wood.
Download original article Part 1 Part 2
Ottawa Citizen, Dec 27, 2012

David Fels' newest carving is big, bold and utterly magnificent. My initial reaction to Sailing Through Time, in the foyer of the new River Building at Carleton University, was a mix of awe and wonder, like no sculpture I've seen since the National Gallery installed Louise Bourgeois's Maman — the giant spider — in 2005.
Though the sculptures share nothing in terms of materials, style, subject, concept or provenance, they are each defined by their mutual embrace of the viewer, as if giant, motherly arms are wrapping around you and protecting you from whatever is out there. Otherwise, the sculptures could hardly be more different.
Maman is cast in bronze, is a recognizable object, and comes from an artist with no personal connection to Ottawa. Sailing Through Time is wood, abstract and has a unique history with Ottawa, one that is — I can't resist saying it — deeply rooted. Sailing Through Time was carved over recent months from a single, massive block of wood. The block, delivered by the City of Ottawa to Fels' on-campus carving site, came from the much-loved "Brighton Beach Oak," which for an estimated 300 years grew in Old Ottawa South, until it was cut down last fall, dead and rotted on the inside.
The idea came from Larry McCloskey, director of the Paul Menton Centre for Students with Disabilities, located in the River Building. McCloskey lives in Old Ottawa South and wanted the mighty oak tree to somehow live on. He brought together the city, Fels and a suggestion for a carving to commemorate the 25th anniversary of Rick Hansen's "Man in Motion" world tour, and the university's "commitment to accessibility." The result will be officially unveiled June 26 at 2 p.m., and will remain, McCloskey says in a note, "back along the banks of the Rideau River for at least another 300 years."
It's easy to imagine the sculpture will last so long, given its scale and grand sense of permanence, To stand next to it is to feel small, and transient.
Fels started with a chunk of oak that included a few large branches. He turned it upside down, so it's wider at the bottom, and carved it in one piece. In a few places, where weight and position would make it unstable, it is reinforced by metal brackets, which is an unobtrusive and fitting nod to that theme of supporting the disabled.
Sailing Through Time evokes, as its name implies, the idea of a sail blowing in the wind, leaning into the future, into the unknown, with confidence and courage. Its shape swoops and billows like arms of ribbon, and from certain angles the arms seem to reach out as if to draw you in. Though you can't actually climb into it, there's more than enough room inside that gigantic, hollowed trunk to comfortably hold a person, even one with a Big Beat girth.
The surface of the wood is a text of whorls, knots and other incremental blemishes. There are dark areas that were blackened by spikes, cleats or other pieces of metal that Fels found buried within those centuries of growth. (Who knows when or why the spikes or cleats were hammered into the tree. Somebody, perhaps, was hanging a swing, or was hanging, perhaps, somebody.)
A few dowels add support, "kind of like rebar in concrete," Fels says. There are plentiful cracks in the wood, some new and some fresh, and as temperature and humidity rise and fall the cracks will expand and contract. It's as if a living, changing thing has been carved from that dead tree.
The life of the carving is infectious, filling me with a sense of motion and emotion, rather like great music can do. Sailing Through Time is like a symphony in wood, its every turn eloquently singing out Fels' belief that "you can't control the way the wind blows, but you always make the best use of it."
Best use, indeed. Sailing Through Time is a masterpiece.

The Mathematics of Fels Sculptures
Authors: David Fels, Angelo B. Mingarelli
Abstract: We give a purely mathematical interpretation and construction of sculptures rendered by one of the authors, known herein as Fels sculptures. We also show that the mathematical framework underlying Ferguson's sculpture, {\it The Ariadne Torus}, may be considered a special case of the more general constructions presented here. More general discussions are also presented about the creation of such sculptures whether they be virtual or in higher dimensional space.
Submitted 3 February, 2014; originally announced February 2014.
Comments: 12 pages, 28 figures. Submitted for publication
Download original article ( https://arxiv.org/abs/1402.0795v1 )